After graduating with a Degree in Fine Art from Edinburgh University she trained in Acting & Clown at Gaulier. She recently completed improv training at The Second City, Groundlings and Upright Citizens Brigade (UCB).

She performs in the London and Los Angeles comedy circuits and has performed at the Edinburgh Fringe Festival between 2009-2019. In 2009 she performed in the show ‘Idiots of Ants’ which was Nominated for the Edinburgh Comedy Award, she then performed in student sketch shows with the Edinburgh Revue and more recently in her sell out five star solo shows ‘Karacters’, ‘140 Karakters’ and ‘Squirrel’. Featuring in Vanity Fair as ‘One to watch’

She regularly writes, performs and creates comedy content for BBC and online with videos receiving over 14 million views. Katia Kvinge recently starred in one of the lead roles in Ashens and the Polybius Heist (100% on Rotten Tomatoes), Please Like on BBC and Feel Good on Netflix. 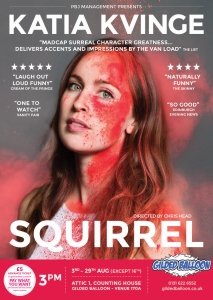